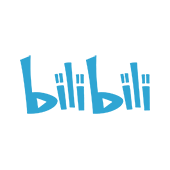 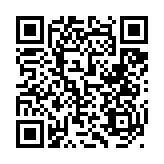 Alberto Accomazzi is the Principal Investigator and Program Manager for the NASA Astrophysics Data System (ADS).
The ADS is the primary Digital Library portal for researchers in Astronomy and Astrophysics. It is also used extensively by the broader community of Space Science Researchers. In addition to the scientific literature, the ADS has for a long time included in its database non-traditional scholarly resources such as research proposals, software packages, and high-level data products, making them discoverable and easily citable. The ADS platform features a number of advanced capabilities such as full-text search, advanced queries using its citation graph, and scalable computation of metrics on any search result. The user interface integrates a number of additional visualizations such as co-author and co-citation networks, providing views of research groups and research topics. In this talk I will highlight some of the advanced features of the system and its distinguishing features. 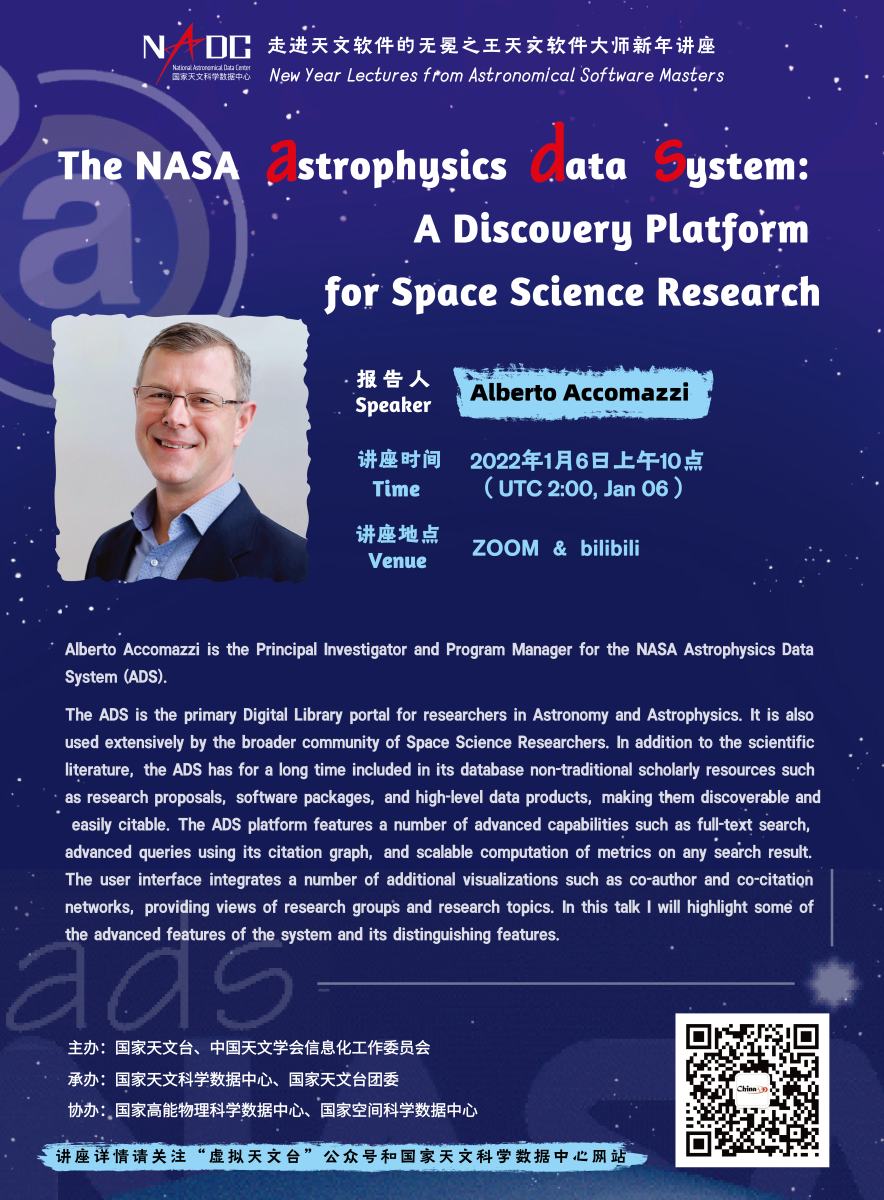 The WorldWide Telescope (WWT) isn't a physical telescope — it's a unique suite of astronomy visualization software. WWT was created at Microsoft Research in honor of the pioneering computer scientist Jim Gray and his vision of a tool that would allow everyone to access the all of the world's astronomical imagery. Since WWT's launch in 2008, its story has been one of constant evolution, including the early creation of a sophisticated WWT web app and the transfer of project management to the American Astronomical Society (AAS) in 2016. But throughout this evolution, WWT has stuck to some core values, including a commitment to excellent core technology, an open and flexible data model, and a design that bridges the needs of learners, educators, and professional researchers. In this talk, WWT architect Jonathan Fay will discuss the origins of the project and the foundations of its success, and current AAS WWT Director Peter K. G. Williams will present recent advances and a vision for where WWT will go in the future. 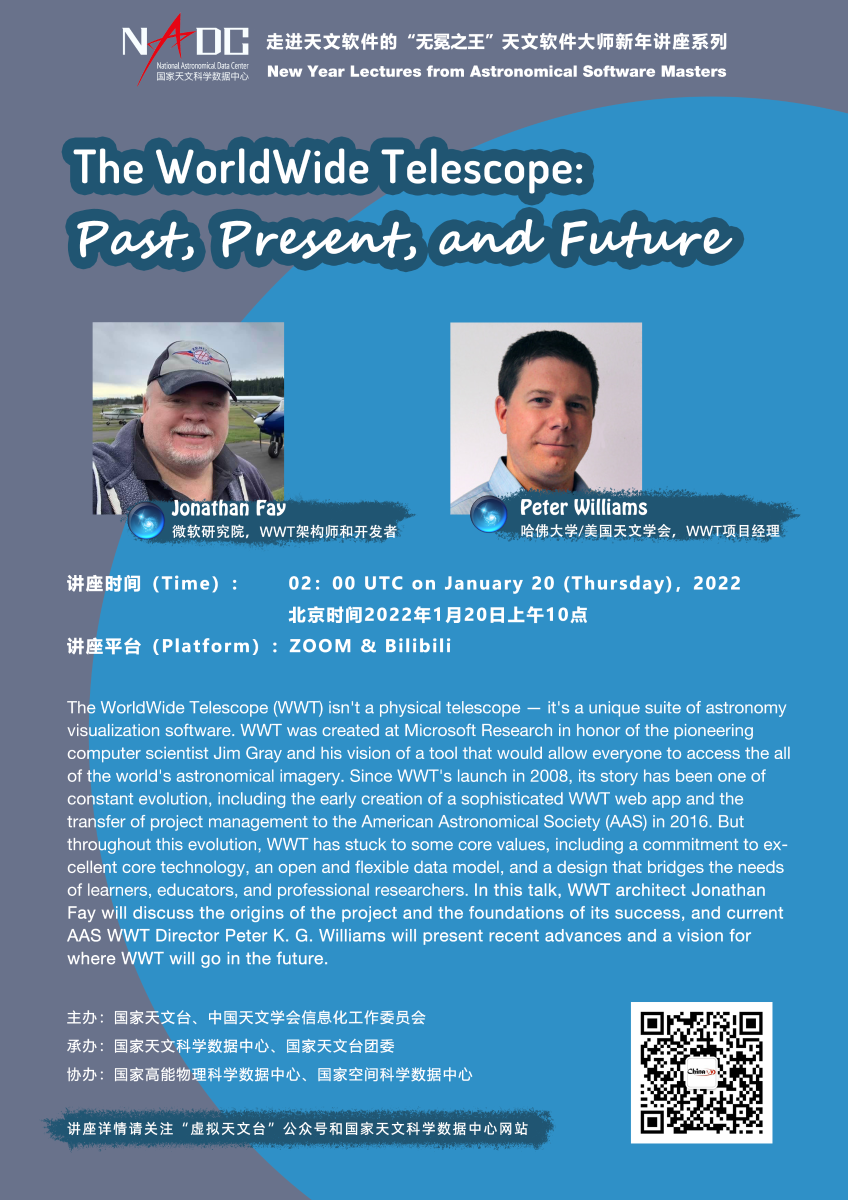 CASA, the Common Astronomy Software Applications package, is the primary data processing software for the Atacama Large Millimeter/submillimeter Array (ALMA) and the Karl G. Jansky Very Large Array (VLA), and is frequently used also for other radio telescopes. The CASA software can handle data from single-dish, aperture-synthesis, and Very Long Baseline Interferometery (VLBI) telescopes. One of its core functionalities is to support the data reduction and imaging pipelines. This talk will give a high-level overview of the basic structure of the CASA software, and how you can use CASA for calibrating and imaging radio astronomical data. The talk will also highlight recent CASA developments, and summarize our initiative for a CASA Next Generation Infrastructure, which can support future radio telescopes, such as the Next-Generation Very Large Array (ngVLA). CASA is developed by an international consortium of scientists based at the National Radio Astronomical Observatory (NRAO), the European Southern Observatory (ESO), the National Astronomical Observatory of Japan (NAOJ), and the Joint Institute for VLBI ERIC (JIVE), under the guidance of NRAO. 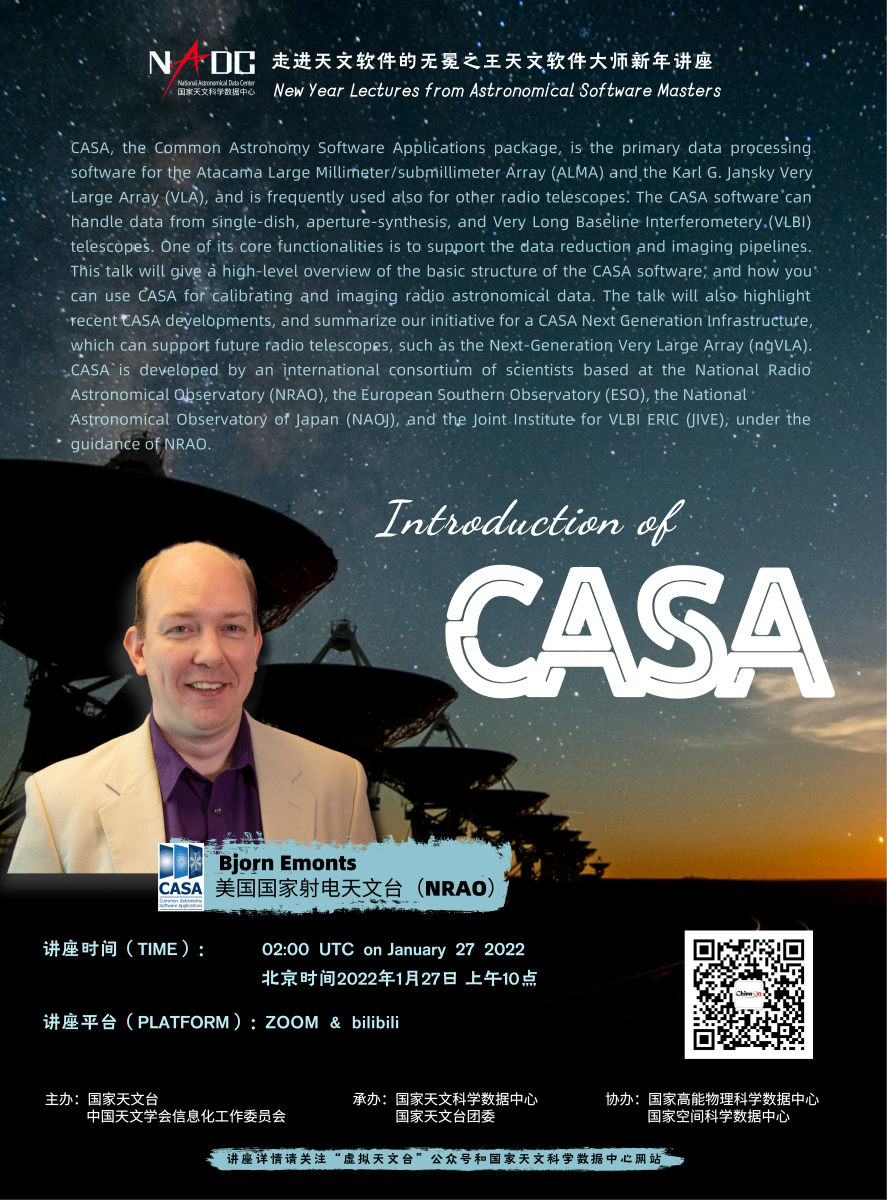