LAMOST published its fifth Data Release (DR5) to astronomers worldwide on June 26, 2019, according to the international astronomical practice and "the LAMOST Spectral Survey Data Policy". It includes all spectra obtained during the pilot survey and the first five years' regular survey. Scientific users can log on to the website powered by China-VO at http://dr5.lamost.org for data query and download. The data release complies with multiple IVOA standards and protocols, including Simple Cone Search, SSA, SAMP, etc.

Through LAMOST DR5, a total number of 9.02 million spectra were released to the international community. Besides, a catalogue which has provided stellar parameters of 5.34 million stars was also released internationally in this data set. The catalog will also be included in CDS VizieR. LAMOST DR5 has thus resulted in the largest public spectral set and stellar parameter catalogue in the world at present. 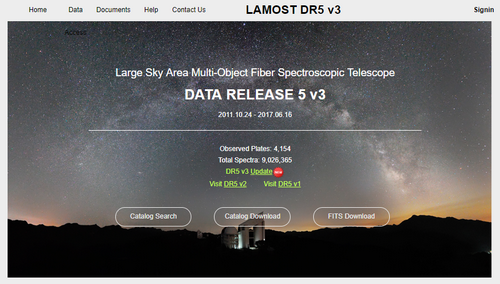