Large Sky Area Multi-object Fiber Spectroscopic Telescope (LAMOST) is a quasi-meridian reflecting Schmidt telescope with an effective light-collecting aperture of 3.6 m to 4.9 m (depending on pointing direction) and a 5 degrees  field of view in diameter (Wang et al. 1996 Su & Cui 2004; Cui et al. 2012), located in Xinglong Station of National Astronomical Observatory, China (NAOC). It has 4000 robotic fibers, with 3.3 arcsec diameter, mounted on its focal plane and connected to 16 spectrographs. Each spectrum of the target is split into two channels, red and blue, and then recorded on red and blue cameras, respectively. The blue channel is optimized for 3700–5900 Å, and the red channel for 5700–9000 Å, with 200 Å overlaps between the two channels. The spectral resolution reaches R~1800 over the entire wavelength range (see Cui et al. 2012). 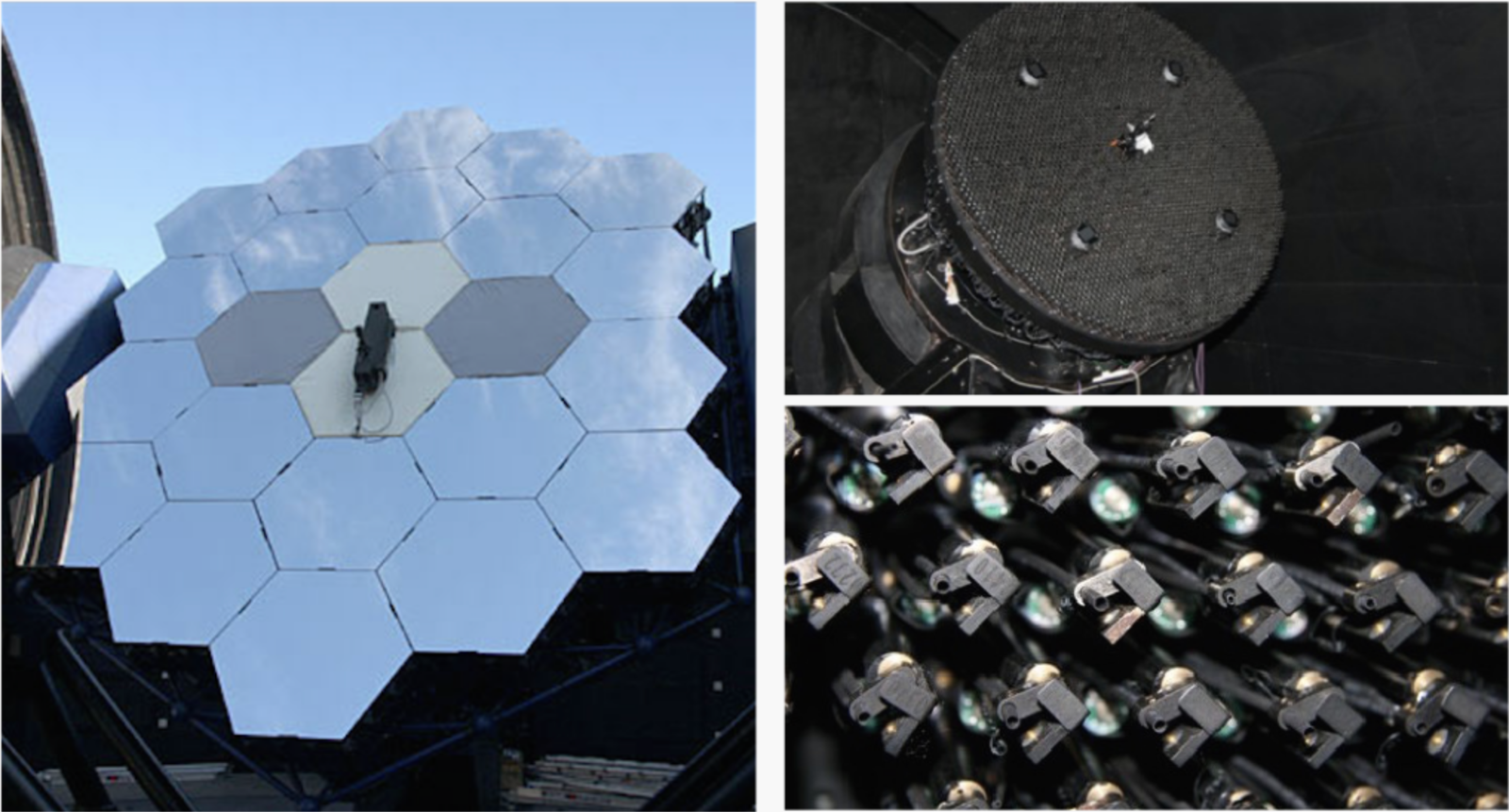 LAMOST regular survey, carried out from September 2012, was designed to have two major components: the LAMOST ExtraGAlactic Survey (LEGAS) and the LAMOST Experiment for Galactic Understanding and Exploration (LEGUE) survey of Milky Way stellar structure (Zhao et al. 2012). The LAMOST quasar survey was conducted under LEGAS, which covers the high Galactic latitude area in the northern sky. This survey aims to make census of quasars at different redshifts for better understanding the growth of supermassive black holes and the co-evolution with their host galaxies.

The details of the methods used to select the targets for LAMOST quasar survey can be found in Wu & Jia (2010), Wu et al. (2012) and Peng et al. (2012). Most of the quasar candidates for spectroscopic follow up are selected based on the photometry data of the Sloan Digital Sky Survey (SDSS, e.g., Ahn et al. 2012). The targets are required to be point sources in SDSS images to avoid large numbers of galaxies. A faint limit of i=20 is adopted to avoid the too low signal-to-noise ratio, and a bright limit of i=16 is adopted to avoid the saturation and the cross-talk of neighboring fibers. The selection is mainly based on the following methods.

After the observations, the spectra were automatically classified by LAMOST 1D pipeline into four categories according to their object types, namely STAR, GALAXY, QSO and Unknown (Luo et al. 2012). Then visual inspection was performed to identify not only the spectra of targets in the input quasar candidate list but also the spectra that are classified as QSO by the pipeline but not included in the candidate list. A Java program ASERA (Yuan et al. 2013) was used for the visual inspection and the estimation of redshifts. The misclassified spectra are rejected or re-classified by eye. Each spectrum is inspected by two or three classifiers to check if the features of spectrum can match the quasar template. A flag of ZWARNING=1 is given when there is only one emission line visible in the spectra. After the quasars are identified, we performed spectral modeling of both narrow and broad components of Hα, Hβ,  MgII and CIV emission lines for each spectrum when possible. The full width at half maximum and equivalent width for these lines are measured. The LAMOST 1D pipeline can only provide relative flux calibration rather than absolute flux calibration for the spectra (Song et al. 2012; Xiang et al. 2015). Thus the continuum luminosity in the previous works (DR1-5, Ai et al. 2016; Dong et al. 2018; Yao et al. 2019) is inferred from the model fitting with the SDSS photometric data, and the continuum luminosity in the latest work (DR6-9, Jin et al. 2022) is measured from the absolute-calibrated spectra that are re-calibrated with the SDSS/Pan-STARRS1 photometric data.

After nine years regular observations, LAMOST quasar survey has obtained the spectra for about 56,175 quasars (Ai et al. 2016; Dong et al. 2018; Yao et al. 2019 and Jin et al. 2022). Among all LAMOST quasars, 31,866 are independently discovered by LAMOST. Among the identified quasars, 24,127 are newly discovered, and the remaining 32,048 are known ones that are reported by SDSS or Milliquas catalogs. Thus, 57% of the quasars are discovered independently by LAMOST quasar survey. In the catalogs, we also provide our measurements of the broad emission lines and the estimations of black hole masses. LAMOST quasar catalog provides not only a great supplement to the new quasar discoveries, but also a large database for investigating quasar spectral variability and discovering unusual AGNs, including changing-look quasars (Yang et al. 2018). 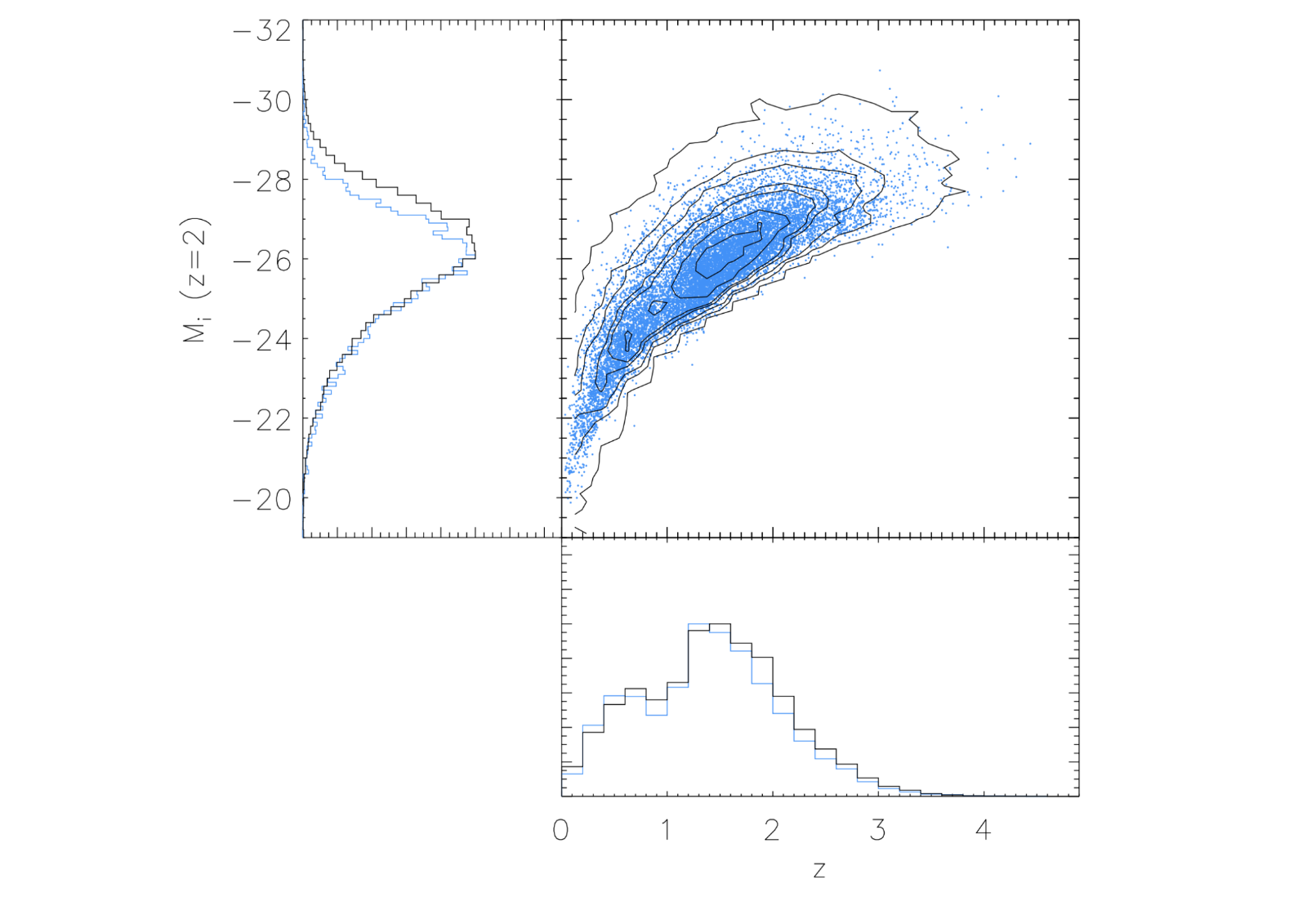 The absolute magnitude and redshift distribution for the visually confirmed quasars for the previous LAMOST quasar survey (black) and in the DR6-9 (blue).

Table 1. The summary of the results of the LAMOST quasar survey up to now

* Please contact PI if you couldn't find spectrum fits in archive due to the updates of catalogs.